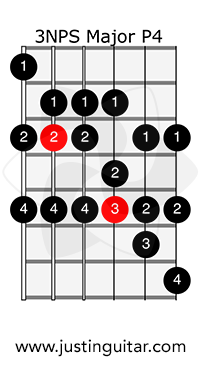 • The outside strings have the same spacing, although they're a fret apart.

• Strings 5/4 have the same dot pattern.

• Strings 3/2 have the same dot pattern but string 2 is up a fret which changes the perspective a bit.

I find using visual tricks like these might help you remember it. You'll also find working on visualization might help - practice your scales away from the instrument!

All the scale patterns in the 5 Pattern System have 17 notes which if you practice playing 4 notes means you arrive back on the root on the beat which is cool - but can also mean it's easy to fall into a regular pattern too which is sometimes not an advantage.

If you practice these 18 note patterns as 16th notes you'll find the beat falling on different notes, which is actually a cool thing - especially if you are working on legato (using hammer-ons and flick-offs) as it will help you break out of mindless patterns and help you work on your time and using the scales in a rhythmic and musical way and not just as fast as possible.

These 3NPS patterns are commonly used for playing legato and very often they're played as triplets so you'd play 3 notes for each beat (click) and that will feel easy for most people, but it may restrict your use of it - I speak from experience, so do work on playing them as 16th notes (4 notes per click) as well as 3 (and 5 and 6 notes per beat if you're adventurous!).