The Diminished Scale is a symmetrical scale and alternates between a semitone and a tone. It's known as a Half Whole when played over Dominant chords. Whole is referring to a Whole Tone and Half is half a Tone, which is better known as a semitone.

The scale formula for the diminished scale easy to remember, just semitone then tone repeat! The formula describes the interval distances between each note of the scale.

Scales are usually compared to the Major Scale to find the intervals used, but because the Diminished Scale has 8 notes (Major Scale has only 7) it makes better sense to just look at it intervallically.

You will see above that I have re-interpreted the notes from a standard analysis to one that would fit with it's use over altered dominant 7th chords.

Looking at the chords from the scale is a lot less useful than in diatonic context (the 7 note scales) although advanced players might enjoy figuring out how many chords they can derive from this collection of notes, it's a fun exercise if nothing else!

If you are studying this scale I would hope you are beyond the need for my Practical Music Theory course but if you're still struggling with chord construction and remembering the notes in your scales it might help! 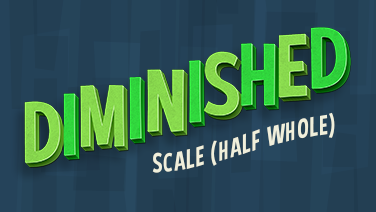