Suspended chords sound like their name. They can be used as chord in their own right, or can be used to embellish a chord sequence. They are very commonly used, and once you learn them, you will start to hear them being used when you listen to music, because the sound is quite distinctive. They are pretty easy to play; the big task is to try and work them into your playing so that they just happen naturally without having to think about it too much.

If you have learnt it the way I recommend in the beginners course here on the site you will still add your 4th finger but the 1st and 2nd fingers will be swapped over...

You can also play it by sliding your 3rd finger forward from either A shape. If you were playing an A with a mini-barre (lesson BC-143) you would probably use your 3rd finger to play the ‘suspended' note, but it doesn't matter which finger you use.

From an Amin chord you would just add your 4th finger. 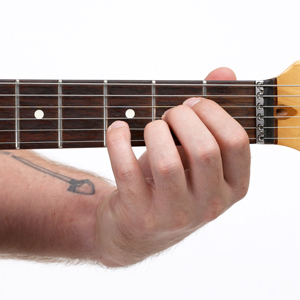 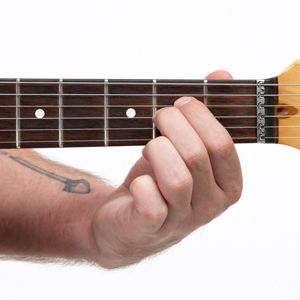 Dsus4 - This is just like playing a regular D chord but with your little finger added under your 4th finger. Pretty easy, really!

Of course if you're coming from a Dm chord, the fingers will be totally different again; Just remember that as long as you have the right dots pressed down that it is not important which fingers you use. In this case you will probably be using your 2nd, 3rd and 4th fingers to fret a Dsus4 chord coming from Dm.

Dsus2 - For this chord, start with a regular D, and then lift off your 2nd finger. Make sure that your 3rd finger is not touching the 1st string or it won't sound, and then it will not sound ‘suspended'! 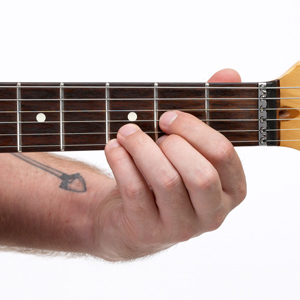 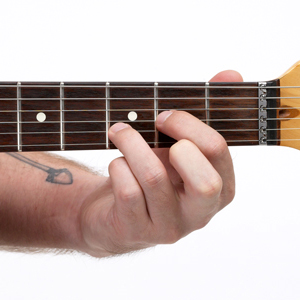 A Touch of Theory...

Chords are generally made up of three notes, called a root, 3rd and 5th: the first, third and fifth notes of a major scale. It's the 3rd that makes a chord major or minor. Perhaps you've noticed that only one note changes when we change a chord from major to minor? That's the 3rd.

‘Suspended' basically means “take away the third and replace with...” so suspended chords are neither major nor minor, and that is why they sound so cool, but also why they want to ‘resolve' to a major or minor chord.

More theory if you want it in Practical Music Theory!

How to Practice Sus Chords...

Sus chords can be used either as a cool-sounding chords in their own right or as ‘ornamental' chords that you might use to embellish a simple chord progression. This second way is the most common way to use them so the best way to play them is with their ‘parent' chords (both major and minor).

For example, you might play D – Dsus4 – D – Dsus2 over and over. Get used to embellishing the D chord with the suspended sounds. Then you might try Dm – Dsus2 – Dm – Dsus4 – Dm so that you get used to the sus sounds with the minors too. These are really cool chords to get down.

Do that with each set of chords and listen out for them in the ‘real' world because you can copy ideas once you have heard them and got the sound stuck in your head.

Now it's time to work on your changes again. 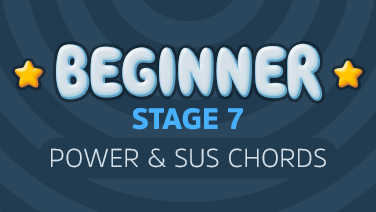