So you've been out shopping and bought yourself a load of effects pedals and you get home and you start wondering what order to put them in...

Well there are not really any rules, but there are some rough guidelines that you might like to start with. I have got some very cool crazy sound by breaking the guidelines, but it will probably help if you know what is going on and the reasons that the guidelines exist!

I borrowed the above quote from an article on effects pedals by Robert Keeley (a maker of seriously fine effects pedals) which can help you remember the order to place your pedals. I have a few slight modifications and additions to this that I use, but this is a great way to remember the rough order quickly, and it comes from one of the great pedal masters.

I'm going to explain and explain each stage in a little more detail and added notes on an effects loop for those with that function available. It's important to stress again in though that there really are no hard and fast rules and you really ought to just experiment.

Every time I get a new pedal I play about with it for quite a while, explore that pedal on its own, and then also play with its position on my board just to see how it's going to work with other effects. I would strongly recommend you do the same!

1. Tuner
Having a tuner on your pedal board is useful but these days I more often use a clip-on tuner, specifically the TC Electronic Polytune Clip (Buy at Amazon UK, Amazon US). I don't like the main signal to run through the tuner all the time if I can help it (I use the GigRig G2 switching system) but if you don't have that luxury, then look for a tuner with True Bypass like the TC Electronic Polytune 2 (Buy at Amazon UK, Amazon US) or use a Volume pedal that has a Tuner Output (many do these days!).

2. Wah / Phaser
Many great players (including Hendrix) placed the wah before distortion... though many of the modern rock guys place it after distortion to make the frequency sweep cleaner. Personally, I prefer the Wah before distortion, but it's personal taste really. Depends a bit on the pedal too - how wide the frequency notch is and what frequency range it covers. I have my Wah on a G-Lab True Bypass Wah Pad, which I think is a great product... I have a few Wahs that I like, the Keeley Mod Vox Wah and the RMC3 are probably my first choices to try out.

The majority of players seem to place the compressor before adding distortion. It changes for me all the time, but I think mostly I prefer it before gain... but I very rarely use compression with distortion - I mostly use it for a clean sound.

I sometimes use the Origin Effects Cali76 or the Keeley compressor (set with very little compression) and it somehow just makes the guitar sound fatter, so I often leave it on all the time with this setting. Lots of guys use a compressor this way - the "make it sound better pedal".

Compressor sometimes sounds good after distortion too, it helps with noise (compressors can be noisy and if put before overdrive then the distortion pedal makes the noise louder). Placing the compressor after distortion also increases your sustain (depending on the type and amount of distortion used!). It can sound darker if placed after as well - so it really is down to your ears and what you think sounds best! But I have mine first in the chain, before Fuzz as I don't often (ever?) use them together

I usually have 2 or 3 distortion units on my pedal board depending on what vibe I am going for.

Overdrive / distortion pedals are one of the most important effects on your board and are very much a personal taste. The ones on my pedal board change all the time, I have more than a few that I really like; Analogman King Of Tone, Pete Cornish SS-3, Ibanez Tube Screamer, Boss Blues Driver, Nobels ODR-1,  Zen Drive, MXR Distortion +... and I like and use all of them. Probably my all-time favourite os the King Of Tone, but on a budget, the Nobels ODR-1 is great value and runs with the very best!

5. EQ
Can be useful after the distortion pedals to shape the sound, and they can also be used as a boost pedal. Remember that boosting here will increase the signal going into the following pedals, and in some cases this may cause 'clipping' (unwanted distortion if the input to a pedal is too high). I don't tend to use EQ much these days, but this is where I placed it when I did, just be careful with how much you boost.

If you want a solo to cut through you can often just boost the mids a bit and it will help it cut through without being too loud. If you are using a valve amp (and using an effects loop) using the EQ as a boost can be a cool way of getting more distortion out of your amp - forcing it to run a little hotter!

<< Effects Loop send - if available >>
If you have an effects loop then here is where you would use it! The reason for using an effects loop is to be able to use the distortion built into your amp - usually valve. I always use this if I can. Why spend a load of cash on your amp with nice valve distortion and then not use it?

After the EQ you would plug into the front of your amp - then send the "send" to the Pitch effect, and then plug the output of the last pedal in the chain (usually delay or reverb) into the "return" in your amp. This is also called the 3 Cable System.

6. Pitch (Vibrato, Whammy Pedal, Pitch Shifters, Pog, Octaver)
Distortion pedals don't like being fed too many frequencies at once (especially if you are using a lot of distortion), so all pitch changing effects will usually come after distortion.

8. Level Pedals (Volume, Tremolo, Noise Gate, Limiter, Compressor)
Volume pedals are best at this point for two reasons. They are often used as an effect and having them here (before the delays) means that the volume swells will get the delay or echo treatment, which usually sounds awesome (think Van Halen's 'Cathedral").

You may also have created quite a lot of hiss as your signal has passed through all those effects and if you push the volume pedal down to zero here that hiss will not be fed into the amp. Placing it here will silence all that.

Included here are noise gates (which make silence if level drops below a set point - great for heavily distorted guitar sounds) and limiters (which stop the signal going higher than a certain level), and could even include a compressor if you wanted it later in the chain, they are often working as a kind of limiter anyhow.

All of that said, when I was touring with Katie Melua, I use my volume pedal first in the chain!

9. Echo (Delay, Digital Delay, Analogue Delay)
This is the point to place your echo and delay units, so that all the cool sounds you have created will be repeated in the delays. You can experiment with this though of course, sometimes you want your delayed signal to be fed into a chorus or pitch shifter, but usually not! But it's up to you to experiment.

My fave delays are the EH Deluxe Memory Man, Boss DD-7, Strymon El Capistan, MXR Carbon Copy, the T-Rex Replica. But most of all I love old tape delays, but I tend to only use them in the studio, not take them out of the studio.

10. Reverb
This is something that replicated a natural environment, so it's last. It's often built into amps too, so it the last thing before the signal hits the power amp. Many of my amps don't have built-in reverb, so I have a reverb pedal on my board most of the time.

Over the years I have a few things that break the guidelines but that really work for me.

Fuzz
Nearly all my Fuzz pedals need to be first or second inline (after Wah if I'm using that too!). you just have to try it and see!

Example Board - Justin's board early 2009

Ok, for an example I dug out a photo of the effects board as I was using it in early 2009, and for the clinic I did with Larry Carlton (there are some YouTube clips of me playing Summertime and I Don't Need No Doctor with this set up if you wanna hear it, using the Suhr Badger 30 amp and a Telecaster). 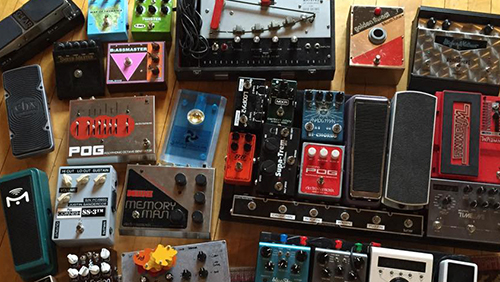