How To Play The D Chord

We’ve finally made it - it's time to get in and play your first chord! We’re going to learn all the skills we need to play a proper chord as we go along, so don’t worry if you have questions right now – hopefully, I’ll answer them shortly, and if not, registered users can get help in the comments section below and I'll do my best to help you out!

Let’s jump into the D chord! Here’s what it looks like. 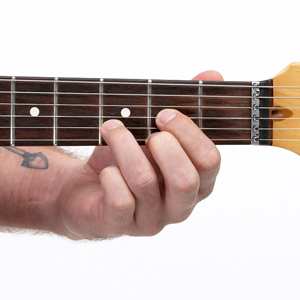 Get The Fingers Down!

Don’t forget to keep your fingers as close to the fret as possible!

So, let’s get in and put your 1st finger down in the 2nd fret of String 3 (remember, that’s the 3rd string from the bottom).

Next, go ahead and place your 2nd and 3rd fingers in position, according to the chord box. You might need to stretch your 3rd finger a bit to get it close to the fret.

Now, note the Xs and Os at the top of the chord box. For the D chord, we don’t play the thickest two strings, and the 4th string is open, meaning we play it, but there are no fingers on it.

Finally, try to strum it! Use your thumb and try to strum down softly on the thinnest four strings – we’ll talk more about strumming later in the lesson!

For many of you, your first chord will sound pretty rough! The early stages are like this – just deal with it! It’s going to be tricky, but I promise you that if you stick with it, you’ll get there! Chord Perfect Practice is a system that will help you identify where you're going wrong, fix what needs to be fixed, and master these chords in four stages. Let's walk through one together.

The 1st stage is finger placement. You're going to place your fingers on the correct strings in the correct frets.

Next, press the strings down and give the chord a strum. It might not sound great at this point, and that's fine! We're going to fix it.

For the 3rd part, we're going to pick out the notes one at a time and figure out how to fix the problems. We want every note ringing out nice and clear.

Start with the open 4th string. If you find that the string is muted, then it’s probably because your 1st finger is touching it.

Moving on, check the 3rd string. If it’s not ringing, make sure the finger is near the fret and pressing hard enough – it might feel a bit painful, at first.

Also, make sure your 3rd finger isn’t touching the 3rd string – the slightest touch will stop the string from ringing out. Many people really struggle with this. Don’t beat yourself up about it if you’re finding it hard to keep each finger on its own string. It will come with practice!

Now, let’s check the 2nd string, played with the 3rd finger. The big challenge here is getting that finger up close enough to the fret – try and edge it up there. You may be a bit more of a stretch than you may have initially expected it to be. Your finger will get more flexible in the coming weeks and you’ll be surprised that this was ever tricky!

Finally, let’s try the thinnest string. For many people, the underneath of the 3rd finger flattens out and touches the string, so make sure you’re playing each string with your fingertips.

The 4th stage of the Chord Perfect Practice is strumming again, after having fixed everything that needed fixing. Is it better the second time around? It should be!

Speaking of fingertips, long nails make it very hard to play with your fingertips, if not impossible!

Probably hurts, right? It did for all of us when we started. For now, try not to press too hard on the strings while you’re practising your finger placements. Also, practice in shorter stints rather than subjecting yourself to long practice sessions. You’ve got to let the skin on your fingertips toughen up - and that just takes time and practice!

There are not any other common fingerings for this chord. Acoustic legend James Taylor does it differently, but I don’t recommend it.

Keep it behind the neck – do what I say, not what I do! You'll need to build up the muscle between your thumb and 1st finger because it will come in handy later on down the line. Keeping your thumb behind the neck as well as keeping the palm of your hand off of the neck as much as possible will help with this.

Memorizing your chords is super important, so try to make a mental note of where each finger goes. Take a good look at the chord diagram to make a mental map – imagine the image in your mind.

Don’t be worried if it all seems hard right now – it does for everyone! We’ve all struggled with this stuff – strings buzzing, notes muted, sore fingers, not strumming the right strings… just stick with it.

Please submit it. This will help me make constant improvements to better your experience.