How To Play The E Chord

Now that you’ve got the A and D chords down, you’re ready for the E major chord, which might actually be easier than those first two. It works really well with A and D, so once you’ve got this one down, you’ll be able to play LOADS of songs with the three of them.

First, arrange your fingers as shown on the neck diagram - one finger at a time, starting with Finger 1. There are no muted strings on this chord, so all six strings will need to ring out here. When you’re placing your fingers, make sure you’re getting them as close to the frets as possible, and also check that you’re playing the strings with your fingertips rather than flattening your fingers out. You don’t want your fingers to accidentally touch and mute any of the other strings! 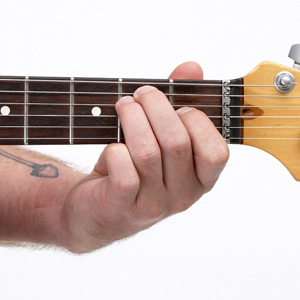 Something else to pay attention to? Your thumb. Yes, the thumb is often overlooked by beginners, but especially in these early stages of your guitar playing, you want to start building up those hand muscles. Don’t overthink this too much, and really, this will be different for everyone because it just depends on your own anatomy, but your thumb should fall somewhere behind your fingers on the upper half of the neck. You mainly want to make sure that wherever your thumb falls, it feels comfortable and your fretting fingers feel supported.

Your chord should sound like it does in the video - or here's an audio file to listen to where I play the notes one at a time:

Before you move on, it’s very important to commit all of your chords to MEMORY. You shouldn’t have to look at a chord chart every time you go to play a chord.

It’s often around this point in a student’s journey that they get the feeling that there is some anatomical or situational reason why they simply can’t continue to learn guitar – their hands are too small or too big, or their fingers are too short/long/weak/strong, etc. I’ve heard it all! Take it from me, though, it’s nothing to worry about. Over the years, I’ve taught young kids with tiny hands that managed amazing stretches and I’ve taught players with fingers thicker than my arms. They all got there in the end!

We all have different battles we need to overcome. Some of us are too busy, some of us have poor quality instruments, some have a short attention span, and some get easily disheartened. One thing is for sure – none of us are perfect, and part of the fun of learning music (in my humble opinion) is overcoming these setbacks and getting on with it, eventually becoming better people along the way, stronger for the battles we’ve won.

So, hang in there. It really does get a lot easier after the first month or two.