The Blue note is the Flat 5 (b5) Scale degree which sounds great in the blues, especially when mixed in with the Minor Pentatonic Scale. Many people learn it as The Blues Scale, and that is fine, but I think it's better to see it as a really cool note that you can add into the Pentatonic to add some spice, rather than think of it as a 'scale'.

The Flat 5 is known as the "Devils Interval" - being half an octave, it creates a lot of tension and dissonance and must be treated with care. I think of it as a strong spice that can really add intense flavour to your food but overdo it and it will spoil the meal!

The Blues Scale, which as you can probably guess from its name, is a commonly used scale in The Blues! It simply adds one note to the Minor Pentatonic and is also pretty easy to play. The additional note is a 'spice' that works great in a Blues soup, but too much and it can make your soup a little sour. Learn and explore it but be aware that you might not want to overuse it, it usually sounds better to play through it rather than stopping on it. 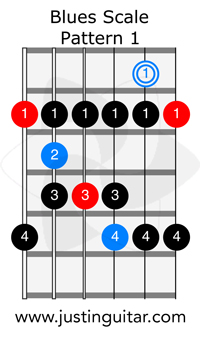 We're playing this scale in the Key of A, so place the Red note (Red = Root) on the 5th fret of the thickest string.

IGNORE the Blue Note on String 2 for now, I want you to know it's there - come back and explore using it when you got the other two workin in your playing.

Try not to move your first finger from the 5th fret when reaching up to the higher note, you need to develop your stretch!

So above you can see that the Blue Notes fit very comfortably within the framework of the Minor Pentatonic - but that's not always the case. Learning it as a note you can add in when you want will also stop you playing in a scale like manner which usually sounds pretty boring. Remember you're trying use use words in the language, not just speak the alphabet. 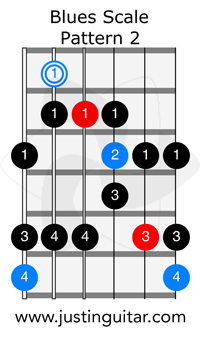 We're playing this scale in the Key of A, so place the Red Note on String 4 on the 7th Fret.

The lower part of this scale is pretty tricky to play, so I usually recommend sliding down to the Blue note on String 5 and playing the two notes on the thickest string with Fingers 2 and 4.

But remember that you'll be adding them in, NOT playing it as a scale (very often, if at all).

I recommend you have a play about now and have some fun with the Blue Note - just try it out, see how it makes you feel - how you 'feel' comfortable using it. Just get exploring and have some fun!

In the next lesson we'll check out 5 Licks Using The Blue Note so you can learn some of the classic blues 'moves' that use it.

Recommended Album
Remember that listening to great Blues is an essential part of the course, so try and check out all my recommended albums, they're the best of the best! 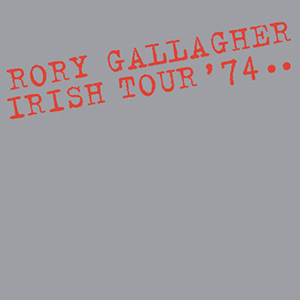 What a guitar player!! Rory tears it up in this incredible live album. I had this album as a teenager on cassette but with no name on it (taped it off someone) and never found out who it was until my late 20's!! Incredible guitar playing!

Here's a sample backing track from my Jam Blues 4 collection, a Heavy Shuffle Blues in A. You jam over it and if you enjoy it, please consider buying the rest of the album, they're all great fun for jamming!

Playing the scale over the backing track and messing around exploring will help get the sound of the scale into your musical mind!. 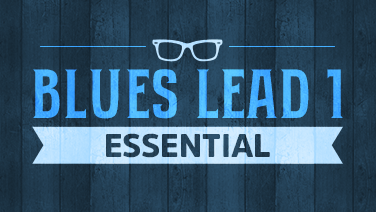