Minor Pentatonic: How & Why

This lesson will explain the how and why parts of learning the Minor Pentatonic Scale. This is one of the most commonly used scales so getting a handle on why it works is pretty important... Be warned though... It's simple on the surface but gets complex underneath! :)

How I discovered the Minor Pentatonic
Like most guitar players (including those who do my beginner course) the Minor Pentatonic Scale was the first scale I learned. It was given to me by my teacher in a private lesson and as well as learning the scale I learned a little blues solo... But there were notes in the solo that were not in the scale... And most of the solos I was learning by ear seemed to have notes that were not in the scale too. So I'm hoping to explain all that to you in this lesson!

It wasn't until later that I noticed that the Minor Pentatonic was a common thread to many (even most) blues solos and it's a great frame to have for blues solos.

What does Pentatonic Mean?
Penta is a prefix for 5, tonic means notes, so it's literally a "minor 5 note scale".

If you are new to improvising you will find it a very helpful scale to learn because all the notes are good over a 12 Bar Blues, some are better than others of course, but you can mess about with the notes in an A Minor Pentatonic Scale over a 12 Bar Blues in A and it'll sound pretty good.

The big thing to remember though is that the Minor Pentatonic Scale is just an alphabet and randomly using notes from it over a blues is like saying kjasn jasdbcy adbd bbbv... That is to say, not much!

So how do I use it to make music?
If you're just starting out with improvising you can explore the scale over a blues and just mess around but it probably won't take long before you realize that it doesn't sound right, that something is missing.

And the missing link is LICKS. Licks are words and without learning words you'll never communicate much. I would strongly recommend that you use my Blues Lead Guitar Course to learn the Minor Pentatonic Scales, because then you will learn licks and how to use the scales as you go.

How does it work harmonically?
Well this is a very interesting question, because it shouldn't work! A normal 12 Bar Blues contains three Major or Dominant Chords. Lets look at it in the Key of A because that is the key most people learn it in and it's dead easy to play a 12 Bar Blues rhythm.

The theory behind all this stuff is explained in my Practical Music Theory ebook if you want to understand this stuff better.

Notes in A Minor Pentatonic are: A C D E G

Now lets look at the notes in the chords and I will bold the notes that ARE contained in the scale.

So you can see that there are lots of notes in the chords that are not in the scales and these clash. Particularly the C# note in the A7 chord and the C note in the scale. These two clash like titans, but in an awesome way, and you could say that this 'clash of 3rds' is THE SOUND OF BLUES!

So the theory doesn't work?
Not really! It works because we've been hearing the sounds for so long that we have become used to this particular 'dissonance' and it's used a lot in common licks.

So what chords can you play it over?
Because the theory 'doesn't work' there are many ways that the Minor Pentatonic is commonly used.

A Blues in the Key of A uses the chords A7, D7 and E7 and this is the perfect scale for this job, so those for a start and you could also just use regular major chords too, A, D and E.

A Minor Blues in the Key Of A uses the chords Am7, Dm7 and Em7 (or E7) and this scale works great for that too, so there is another bunch of chords to explore. The regular minor chords work as well of course, Am, Dm and Em.

In Rock songs it's common to build Power Chords from each scale degree which gives us another few chords to use. These in the Key of A would be A5, C5, D5, E5 and G5. So any or all of these chords work great.

It can also be used over Major diatonic progressions, for the reasons shown below!

So because the Minor Pentatonic Scale is contained inside the Major Scales above, you can use it over any of the chords in any of the above keys! If you wanna understand this stuff, the how is in Practical Music Theory!

So what's going on with these 'other notes' you often see in Blues solos?
Well there are a few things that can be going on, depends on the player and situation and style.

1. Use the "Blues Scale" which is the same as the Minor Pentatonic but with an added b5 scale degree.

2. Use the chord tones from the chord being played, most likely using arpeggios or Chord Specific Licks.

3. Use additional notes from the Parent Major Scale, also called playing with Modes.

How should you learn The Minor Pentatonic Scale?
Just get stuck into my Blues Lead Guitar Course and learn it that way. It's the vocabulary that is really important to know, even if you choose later not to use it.

Don't be afraid of learning licks - they are the thing that will make your playing 'make sense' - all that is explained in the above course!

So can I get jamming now?
Sure you can, lets chat more about that in the next lesson! 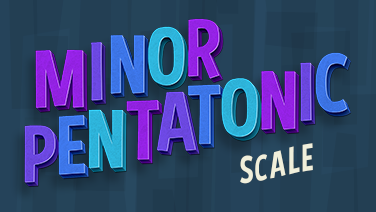