Now it is time to look at a shuffle rhythm, because it sounds cool when you are playing blues.

First of all, let's look at a bar with four beats in it, with each beat divided into three (triplets). As in the previous lesson, we count this with the number of the beat, ‘trip' and then ‘let'.

Then, we get rid of the middle note from each triplet, and we end up with a rhythm called a shuffle.

You can see that we still strum down on the beat, and we use an up-strum for the ‘-let'. So it is similar to the usual down-up pattern, but with the up-strum delayed slightly.

You can see there are four triplets in the bar. Counting as shown above while you play should help you know where you are. Say the ‘trip', even though you are not playing it.

This shuffle-type of strumming has many variations and it not quite as ‘tight' as I am showing you here. If you think of the first strum being right on the beat (which it should be) then the second strum (the up) can be anywhere in between where the ‘and' would have been and the next beat, depending upon the groove you are playing.

For now you should work on getting the shuffle just as I have shown it in the above example, but be aware that in the future you might play around with this idea a bit.

Try to put this into practice, maybe playing a simple 12-Bar Blues using 7th chords and this shuffle strumming. You now know six dominant 7th chords, which means that you can play a 12-Bar progression in four different keys! (A, G, D and E) so you might like to try playing some of the blues songs in The Beginner Songbook (Stage 5), or look up some of your own; there are literally hundreds of songs that use the 12-Bar Blues progression!

I know in the vid I talk about the "common chord sequences lesson" but I have changed that for the "Easy Songs" but I hadn't thought of doing that until after we filmed the vid!

The chord sequences that I talk about in the video here are 12-Bar Blues chord progressions (shown below): the chords for a blues in the keys of A, G, D and E, which you can play with the 7th chords that you now know. Play each chord for one bar for each time it is shown and try using the shuffle rhythm opposite.

Yes, the first chord is held for four bars, which does seem an awfully long time if you are playing a slow blues. In the blues in E, I have made it a ‘quick change' blues which has a chord change in the second bar. Can you work out how to make the blues in A and G into ‘quick changes'? I'm sure you can...

Remember, that you have a choice of ways of playing A7 and E7. Use whichever is most comfortable for you.

The most important thing is to be able to play all the way through without getting out of time or stopping, preferably with a metronome. Once you can do it at a slow tempo, gradually build the tempo up.

Any of you theory geeks that want to get into how a blues works might like to check out BL-110 which explains the I, IV and V chords. In a more complex surrounding. But there is no need to go there unless you are really keen on learning the theory and already understand keys and chords in keys. If you don't understand those things you need to get Practical Music Theory.

Many people find counting uncomfortable and would rather do it by ‘feel'. This is fine as long as you are 100% sure you are getting it 100% right. Otherwise, really work on your counting. Counting becomes more important later when the rhythms become complex (on a scale between 1 to 100 of rhythmic complexity, we're looking at about 3 right now, so there is a long way to go!). The good news is: it gets easier as you go on, too. Once you get the basics really solid then it becomes easier to add in new things.

There are many hundreds of blues songs that you can play if you know these sequences, For instance, ‘Before You Accuse Me', ‘Johnny B Goode', ‘Carol'... actually, it's probably thousands. Many will have slight variations on the basic pattern shown above, but they usually work with these ‘straight' sequences.

Have some fun with them and then have a go at some of these tunes.

We look at some of these tunes in the next lesson. 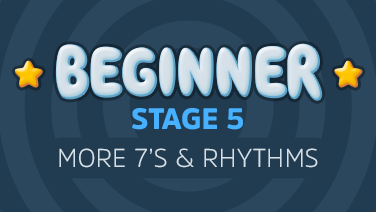