Now you have done some hard stretches and given your little finger some punishment, I'll show you a little cheat for the F Chord which sounds great and is really useful!

The big F chord is a little nasty so until we learn that in Stage 6 (Lesson BC-161) I want you to check out this chord, which is easy to play and SOMETIMES sounds good as a substitute for F.

You MUST listen if you are going to try and substitute this one for a big F chord. Sometimes you can replace a regular F with this chord, sometimes you can't. There is theory behind it, but it's too complicated to go into now and it is more important to use your ears to hear if it sounds good or not. If it sounds good, it is good!

It will always work as a substitute for F if your 1st finger lays a bit flat and mutes the thinnest string, because then you are playing a regular F (the open E string is what makes this chord a ‘Major' 7th). 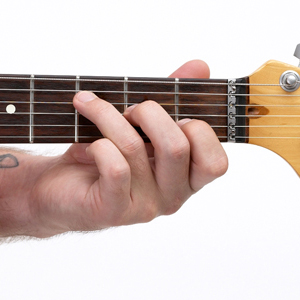 If you've got the hang of the chord shown above, you could also try the shape below, which brings your little finger into play as well. This 'grip' of the chord is very popular with the guitarists of the 60's and 70's and many of them still use it. I must admit I use this one more than the smaller one, but it's a little harder to change to. 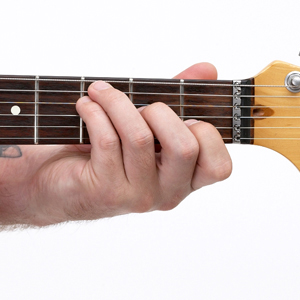 Once you have that under your fingers it's time to go to the mini-bar ;) 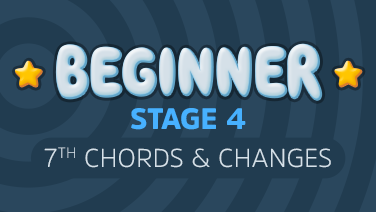