A capo is a very useful little device that enables you to use the same chord shapes to play songs in different keys.

It is wise for singers to move a song into a key that suits their voice. A capo is also used to simplify some songs that would otherwise require barre chords. It doesn't work with all songs (for some, you simply have to learn barre chords) but for many tunes, a capo is a great option.

They are not just for beginners, either. Some players seem to think they are a beginner's tool, but they become more and more interesting the longer you play, because they expand the possibilities of the guitar, which is great fun. So don't be put off by any capo snobs, they don't know what they are talking about!

There seems to be a lot of debate about the correct pronunciation of the word. I say it cap-o, others say Kay-po, it seems to be a US vs English thing, but who cares? Not me!

It is important that you put the capo just behind the fret (the same as you should be doing with your fingers too!) or you will get lots of buzzing sounds.

A great idea is to make a "Capo Chart" showing the open chords and what chord they become with the capo on each fret. You will probably only have to make the chart once, because once you have done it you will understand it all and not have to use it! And if you have to reference it once in a while, that is ok, but like everything else, you have to try and get all this info into your memory!

Each of the chords you play in open position can be played using a capo, but if you do that, the name of the chord changes; it goes up one semitone for every fret the capo is moved up. So an open G chord with a capo on the 1st fret will become a G# chord. With the capo on the 2nd fret it will become an A chord, and so on. Try it now and hear for yourself:

Play an open A chord. Then put the capo on fret 2, and play a G chord. They sound more or less the same! Because of this, capos can be used in some circumstances to replace barre chords. Let's say the chords in the song you want to play have the chords Bm, E and A in it, but you don't know how to play Bm. However, you can get a Bm by playing an A minor with the capo on the 2nd fret! Check the other chords and you'll find you can get an E chord by playing a D, and an A chord by playing G.

The above trick doesn't always work, but it very often does, and can mean that you can play some songs that you previously thought you couldn't. It's this concept that I used for many of the songs in the songbook so you could play along with the original records, using basic chords.

Next up we are going to have a little look at basic guitar set ups. 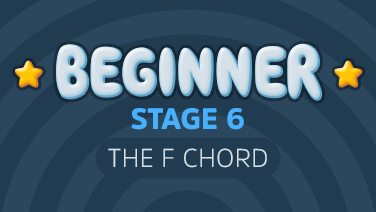