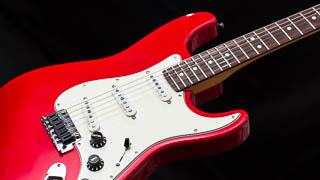 This was my first 'proper' guitar and it's been heavily modified over the years. I bought it because Aussie guitar legend Simon Patterson came to see me play in a local bar and told me that I played well but my tone sucked and I should get myself a Strat - so the very next day I did just that! Big thanks to the Simon because it was the first step on my tone quest, prior to that I hadn't really paid much attention to tone... I played a Jackson Dinky through a Peavy head.

I got it when I was about 17 years old from my local music store, McCanns Music in Elizabeth St, Hobart, Tasmania.

It was the only guitar I took with me when I moved to London in 1996, so it's got a lot of sentimental value.

It's had various pickups and pickguards, I tend to change the pickguard and all electrics at once, so I have a couple of the old guards around in a box someplace... the 'lace sensor' bridge got replaced with Seymour Duncan Hot Stack pretty early on, and the nut was replaced a few times (the original one sucked!). The Bridge saddles are the Teflon ones, really great string savers.

At the moment it has a full set of Kinmann "Woodstock" pickups which will probably stay in it!