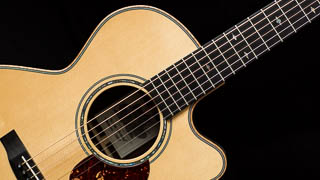 This Froggy Bottom was the first acoustic guitar I've bought in years, had no intention of buying it but happened to be at The North American Guitar and played a few and this one just spoke to me. As soon as I mortgaged my kidney I had her! :)

Electrics
She's fitted with a K&K Trinity Onboard system, mic and under bridge pickups and an additional Dimarzio Black Angel magnetic pickup which I use for driving effects. They come out of a stereo jack and are split into two cables on my pedalboard.

The setup was done by Nick Benjamin and he did an amazing job, plays and sounds sweeter than any other acoustic I've ever owned!

Thanks to Nik Kent for the sexy pix!