In this module, we are going to get a taste of the blues! I'm working on another beginner blues module for Grade 3 and I have a ton of blues courses already (mostly aimed at Intermediate players), so if you dig on this - there's plenty to move forward with later!

One thing I should mention - I went acoustic guitar to teach this lesson mainly because the last lesson was so electric - but the Blues works great on both acoustic and electric - in fact, other than very early blues on a resonator acoustic - it is more associated with electric guitar.  For lead guitar it's usually easier on electric - but you can (and should!) do it on both!

Let's get into it!

Dominant 7th chords are awesome for Blues and many other styles.

The shuffle is where the groove lives - you gotta get hip with this concept and put it into practice!

Using a minor pentatonic scale, we’re going to get into blues soloing. This is a great one to practice with a jam buddy!

The blues are all about improvisation! Here are some guidelines and tips to get you started on the proper foot. 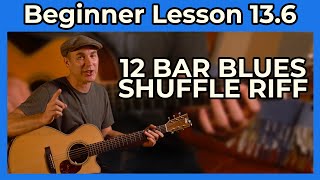 This shuffle riff is part of your blues foundation. You’ll almost certainly recognize it immediately! It’s perfect for soloing over, too, if you’ve got a jam buddy. 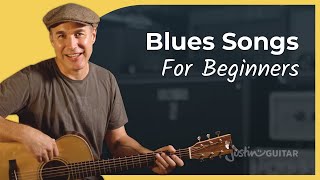 There are thousands of songs you can play once you nail the Blues - here are some suggestions for listening! 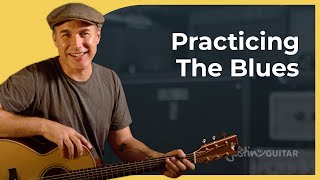 Time to put all this new stuff into practice - and get listing to a ton of Blues!